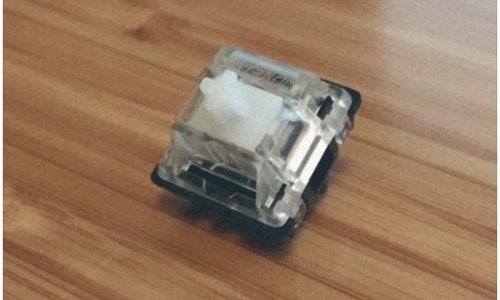 Note: This is a review by friend of the shop /u/myanngo

When I first got into mechanical keyboards I thought linear switches were lifeless and plain.

There was nothing striking about them. Where’s the click? Where’s the bump? Why bother typing on a springy plunger?

Over the years, I realized that one of the best ways to enjoy a mechanical keyboard is with linears.

Their smooth travel allows you to truly appreciate the keyboard as a whole rather than being distracted by inconsistent bumps or clicks.

Not to mention the satisfying thocky sound after every key press.

First off, to avoid any confusion, these Gateron Clear switches are linear and not clones of Cherry MX Clear or Halo/Hako Clear, which are tactile.

Please don’t confuse them with each other!

Diamond In The Rough?

Out of the box, these switches were nothing to write home about.

They are scratchy and not quite as smooth as I hoped, somewhere in between retooled Cherries and Kailh MX linears.

From my tests, black bottoms are the least scratchy, milky are the scratchiest, and the SMD white bottoms fall somewhere in between.

It is worth noting that not all switches have the same scratchiness; some are smooth out of the box, some more scratchy than others.

Your mileage may vary as factories retool their equipment all the time.

After some tinkering, I found that the scratchiness seems to come from the railing and spring post rather than the stem.

How do I know the stem isn’t the problem?

I swapped the stems into various MX housings including Cherry, Kailh and Zeal (they don’t fit well in Outemu v1).

All of these franken-switches were much smoother than the stock Clears.

All switches need time to break in, so I held back my judgement.

After three weeks of extensive essay writing, I am happy to report that these switches have broken in very nicely.

The scratchiness was reduced and evened-out, enough to make them smoother than stock Kailh MX linears.

They are still not quite as smooth as Kailh BOX or vintage or retooled Cherry, though.

For that reason, lubing is essential for these switches (see the Lube section below)

Light As A Feather

What sets Gateron Clears apart from other linear switches on the market are their feather-light springs.

Measuring at only 35g actuation force and 45g bottom out, these switches are so light that putting too much weight on the keycap may accidentally actuate the switch.

My friends say that I have neanderthal fingers - I bottom out too easily even on heavy springs.

As a result, I didn't particularly appreciate typing on Gateron Clears at first. I would make frequent typos, and my typing speed plunged from 95 WPM down to 60 WPM.

I kept hitting the edge of the keycaps and actuating the adjacent switch, and also caused unintentional key presses by resting my fingers too heavily.

But I pressed on for science...

After some time, my typing speed returned to normal and I realized I don’t have neanderthal’s fingers - I have adaptive fingers!

Typing on these switches has changed my typing experience, maybe forever.

Over time, I’ve grown to appreciate the Gateron Clears more and more. I’ve never typed on something so light and enjoyable.

The typing feel is almost dreamy and relaxing.

Words seem like they are appearing on your screen without you having to move a muscle.

Avoiding bottoming out on these switches is almost impossible during normal typing and I have given up trying!

To get a better idea of how light these Clears are, put your fingers on a table and tap it rapidly while making minimal noise….

This is how much force is required to bottom out these switches.

I’ve always thought heavy, cushy linears were the way to go and refused to give light springs a second chance after one bad experience with them.

But this typing experience has re-ignited my passion for mechanical keyboards once again right as I was starting to get tired of the usual switch designs.

On my GK64 chassis, the bottom out feel on these switches is quite harsh.

My first thought was that maybe they have a shorter travel distance. I even took out a caliper to measure the travel to make sure I wasn’t going crazy.

After writing this review, I relocated them to a wooden case with an acrylic mounting plate and the difference is night and day: a much mellower bottom out clack. I would suggest you use a board with some flex when using these switches.

Of course, the sound produced by a switch is highly dependent on the chassis it’s mounted in.

I have my Gateron Clears in a GK64 which, admittedly, isn’t the greatest keyboard for these switches.

The case has too many standoff points, making the plate and PCB very stiff with next to no flex, thus creating a flat, solid bottoming out sound.

With that said, I wrapped the whole keyboard in studio foam in an attempt to isolate all of the unnecessary noises for a more accurate judgement of the switches.

Sound wise, Gateron Clears have a higher toned pitch compared to Cherry Blacks. This is probably due to the material used for Gateron’s top housing, as it amplifies and reverb sound better than the nylon material used for Cherry’s

These were installed in a switch tester with the same position and same keycap. I tried to tap the switches as evenly as I could. The results:

Personally, my ears couldn’t tell much of a difference between the spring-swapped Black and the stock Clear. But a notable jump in volume occured from the harder bottoming out caused by moving from the Cherry Black’s stock 60g spring to the Clear’s 35g.

Aside from volume, SMD and Milky variants of Gateron Clears have a gritty, grainy sound produced when the switch is pressed off center, even when the switch has already been broken in.

The sound is quite similar to Outemu Ice V1 and pre-retooled Cherry switches.

The black bottom version also exhibits the same scratchy sound but it is very faint and you won’t be able to hear it unless you bring the switch right up to your ear.

One thing to watch out for is the occasional faulty switch that exhibits a high pitched ping due to bent contact leaves. These leaves bend forward more than usual, pressing firmly against the switch stem.

When the stem bottoms out, the contact leaf flies forward and slams against the upper part of the stem thus creating the pinging noise. This problem can be fixed by bending the leaves back slightly.

When buying, I suggest you get a few more than you need just to be sure and get the black bottom version for the best sound.

The biggest downside to this switch is its wobbliness, which is quite well known.

The wobble comes from the top being too loose, thus giving the stem too much wiggle room. Luckily, this issue can easily be fixed as the main problem lies on the switch top and not the base.

Gateron switches are standard Cherry-style tops and not the wing latch type like Kailh or Outemu v1. This allows users to swap out their tops for tighter ones.

Cherry tops could help to reduce wobble slightly and create a much better, deeper sounding switch since they are made out of nylon.

Your keycaps will also affect the wobble. Taller and heavier keycap profiles such as SA or MT3 will cause more wobble than lower profile keycaps such as DSA or XDA.

Most premade keyboards with Gateron Clear switches often come with mid-height keycaps such as Cherry or OEM which generate medium wobble.

But due to this switch’s ultra-light spring, you will probably bottom out before your mind starts to notice any wobble anyway.

Lubing a switch this light can be quite tricky, as too much lube can easily make the Clears feel sluggish.

An oil or thin mix is highly recommended as thicker lube tends to gum the switch up.

I didn’t have enough thin lube for the whole board, so I opted to use some Tribosys 3204 (Krytox 204 Grade 0 equivalent) instead.

I lubed every surface where the stem can create friction: the stem itself, switch top, contact leaves, the bottom railing and inside of the spring post.

For further details, Reddit user u/mikeybox has a fantastic in-depth post with tons of pictures of a switch’s areas of friction.

After lubing, the switches are ever so slightly slower. This is probably due to the lubing method I used which is extremely thorough and covers pretty much every friction point imaginable.

In hindsight, I should have skipped lubing the switch top and the inside of the spring post as it slightly gummed up the switches. I’d imagine this wouldn’t be an issue if you used thin lube instead or a mix of thin and thick lubes.

Remarkably, all of the negatives about the scratchiness mentioned earlier are remedied. The switch became unbelievably smooth, I honestly struggle to think of another switch of this level of smoothness (maybe the cheeks of my aunt’s newborn? But that’s not a switch...).

Even when compared to my favorite linear fraken-switch: lubed vintage Cherry MX Black stem in Zealios housing, lubed Gateron Clears still has the edge when it comes to smoothness.

This is thanks to the feathery light springs, as they provide so little resistance that you’ll bottom out before being able to detect any scratchiness during typing.

One interesting thing that I noticed is that after lubing, some switches became so smooth that I started to feel the contact leaves moving when pressing the switch slowly without a keycap on.

Interestingly, this creates a mini, short tactile bump but not to worry, you wouldn’t feel the slightest hint of tactility with a keycap on.

Conclusion - Who Are These For?

When this switch first came out, the mechanical keyboard community wasn’t too sure who these switches were for.

I often see these switches recommended for extremely light typists or people with carpal tunnel as they still get the benefit of using a mechanical keyboard without putting undue stress on their hands.

Gamers looking for a low force, quick actuation switch are also pushed in the direction of Gat Clears.

Are these the only use cases?

Exploring and trying out new stuff is a big part of this hobby, something I find very refreshing.

Although they certainly took some fine tuning, my time with Gateron Clears has probably refined my typing style forever.

If you’re looking for something light, almost effervescent, in a linear switch, Gateron Clears are well worth it given their very reasonable price point.

Gateron Clears are in stock and available for purchase here: